Republished with permission from Roger Ogden at Patriot Fire

Just when it seems things are getting better, Biden and open-borders radical, DHS Secretary Mayorkas, are now plotting to encourage a new and even much larger surge at the border that would be a giant, diabolical step towards totally disenfranchising current American citizens via a wave of fake refugees, that is mostly economic refugees. A great majority of them are people, who would not qualify for asylum under the current asylum process, but who would say and do anything to gain access to the U.S. They will even greatly endanger their own children in the process or indenture themselves to a cartel to pay the high cost of smuggling them from their homeland across the border.

He has proposed to bypass Congress and change regulations so that those coming across the border illegally, would be granted asylum not by a court, as now is the process, but by bureaucrats, many of whom will be sympathetic to the radical cause of open borders. This regulation will be challenged in the courts, but everyone should be aware this is what they are doing. It is a gun held to the head of American sovereignty and we just do not know, yet, whether it will go off.

I first read about this on Discover the Networks, which referenced a Breitbart article. Breitbart talks about the asylum fraudsters coming for your jobs, but in the long run the purpose of bringing them here is to destroy the sovereignty of the U.S. and disenfranchise the American people, that is, achieve Obama’s utopian, progressive “transformation” of America into just another international community in the global village that has no independent sovereign rights.

It seemed incredible to me, but I found this very recent DHS post date August 22, 2021, which confirms the articles, albeit in sanitized bureaucratic language to somewhat camouflage the actual intent of the rules change.

This regulatory change would allow bureaucrats to grant asylum as soon as the illegal crosser has passed a low-bar “credible fear” interview. The credible fear interview is just a first attempt to determine whether the person has a real fear of persecution, due to immutable characteristics that he/she may have. It is based largely on the “honor system” and for that reason is an invitation for those, who want to manipulate the system, to lie. People can be trained to say the right things to pass the interview.

It would be the old catch-and-release process on steroids. By the old procedure, they would be released with a court date, which most would skip or lose their case, thereby living illegally in the U.S. and getting an automatic deportation order. With the new system, they would be released with asylum granted already by a bureaucrat (not a judge) and permission to live in the U.S. legally for the indefinite future with no pending court case.

The credible-fear interviewer is required, by law, to make an attempt to verify the claims, but if they cannot be verified, the statements must be accepted as “true” and the claimant will be welcomed to indefinite legal residency in the U.S. to await the next mass asylum. If it takes a few years until their children become old enough to vote for progressive “transformation”, that is not a problem. It is a long-term plan. It has been in the works for decades already. 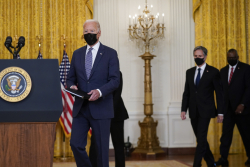 We Must Hold the Line Against Our Corrupt Elites

Why the War in Afghanistan Didn't Have to Happen 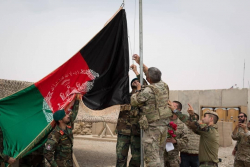