Here’s What You Need to Remember: Unlike during Desert Storm, where Harriers expended only unguided ordnance, most of the expenditures during Iraqi Freedom were of the guided variety. As in Afghanistan, Harriers would provide CAS during the entire occupation, up until the U.S. withdrawal in 2011.

Since the intervention by the United States and coalition partners began in 2014, the Middle East’s skies have become crowded with the very best in modern air power. The air is full of flashy fourth-generation fighters (like the Air Force’s F-15s and F-16s and the Navy’s F/A-18E/Fs), and newer fifth-generation fighters (like the F-22). But also flying proudly with these other planes is a Marine Corps mainstay generally not considered a fourth-generation platform and unlikely to win any beauty contests—the McDonnell Douglas AV-8B Harrier II. That plane has, time and again, proven itself a highly effective multirole combat aircraft.

The Harrier II is unique among American military aircraft as one of few to have been adapted from a foreign design. The AV-8B’s origin traces back to the British Hawker Siddeley Harrier, which was designed in the 1960s. Though not the first vertical/short take-off and landing (V/STOL) aircraft built, it was the first fully operational and successful example. V/STOL capability was revolutionary because it created an aircraft that could operate from short or less-than-ideal runways, or from no runway at all.

Recommended: A New Report Reveals Why There Won’t Be Any ‘New’ F-22 Raptors

V/STOL caught the eye of the U.S. Marine Corps and, by 1971, the service was flying harriers. Designated the AV-8A, the American export model was similar in most respects to the British Harrier GR.1. A single-seater, the Marines intended for the Harrier to conduct ground attack, close air support (CAS), reconnaissance, and fighter missions. Despite giving the appearance of radical design, the AV-8A was quite unsophisticated on the inside, possessing bare-bones navigation and attack systems. Its armament was limited to AIM-9 Sidewinder infrared-guided air-to-air missiles and unguided air-to-ground ordnance such as rockets and general-purpose bombs.

Despite its drawbacks, the Marines were happy with the Harrier, and it continued to serve from both forward bases and aboard amphibious warfare ships. At the same, the Marines sought to improve deficiencies in payload and range and, in the mid-1970s, began development on what would become the Harrier II. By the end of the decade, the project had come entirely under the direction of American aircraft manufacturer McDonnell Douglas. Designated as AV-8B, the improved Harrier entered service in 1985 and, by 1987, all A and C-models (an upgrade of the A) were withdrawn from service.

Like its predecessor, the AV-8B was initially capable of day attack only but added the AN/ASB-19 Angle Rate Bombing System (ARBS), which was equipped with a laser spot-tracker and television, plus the AN/ALR-67 radar warning receiver (RWR). By 1991, a night attack version emerged, equipped with a nose-mounted Forward-Looking Infrared (FLIR), night-vision goggle (NVG)-compatible cockpit, and a digital moving-map display.

The latest variant of the AV-8B in operation is the Harrier II+, first introduced in 1993. Like other fighters currently in U.S. service, such as the Air Force’s F-15E Strike Eagle or the Navy’s F/A-18E/F Super Hornet, the Harrier II+ is a leaps-and-bounds improvement from the AV-8A and even the original “Day Attack-Only” AV-8B. In addition to the features on the “Night Attack,” the “Plus” added the AN/APG-65 radar, the same radar initially fielded on the F/A-18 Hornet. Along with the Sidewinder, it also fires the AIM-120 AMRAAM, giving the Harrier II beyond-visual-range (BVR) air-to-air capability.

The AV-8B is, of course, an attack aircraft, first and foremost. It is geared with a single GAU-12 Equalizer 25mm cannon and six hardpoints that can carry up to 9,200 pounds of ordnance—two hardpoints and over 4,000 pounds more than the original Harrier. In addition to rockets and unguided bombs, the Harrier II now employs the AGM-65E Maverick laser-guided ground-attack missile, GBU-12 and GBU-16 Paveway laser-guided and Joint Direct Attack Munition (JDAM) satellite-guided bombs. Precision strike is conducted through the AN/AAQ-28(V)1 LITENING targeting pod, which offers high-resolution target imagery from altitudes up to 50,000 feet and a laser designator. This followed the evolutionary roadmap established by attack aircraft like the Air Force’s A-10 Thunderbolt II. Like the A-10, the Harrier II was initially a dedicated CAS platform which eventually adopted precision-strike capabilities that tremendously expanded its mission set. More recent upgrades also include integration into the Link 16 data exchange network, which allows the AV-8B to transmit and share data with other platforms. The LITENING pod also permits Harrier pilots to transmit real-time imagery to troops on the ground via the ROVER system, allowing the latter to see what the former is seeing from the air.

Furthermore, the Harrier II is powered by the Rolls-Royce Pegasus F402-RR-408 thrust-vectoring turbofan, producing 23,500 lbs. of thrust, making it both more powerful and reliable than the original Pegasus powerplant. It is a subsonic aircraft, with an airspeed of less than Mach 1 (673 mph.) and has a combat radius of only 300 nautical miles. The limitation in range, however, is mitigated by V/STOL, which permits the Harrier to be deployed far forward without relying exclusively on air bases or carriers like other fixed-wing aircraft. Much like helicopters, it can instead utilize Forward Area Refueling/Rearming Points (FARPs).

The Harrier has earned the reputation of being a “widow-maker,” owing to the eyebrow-raising number of losses and fatalities incurred in both American and foreign service. A sizable percentage of these losses happened during take-off and landing, suggesting the Harrier’s V/STOL capability posed unique risks not present in conventional aircraft. But as Lon Nordeen, author of three books on the AV-8B, points out, airplanes like the A-4 Skyhawk and A-7 Corsair suffered even higher mishap rates, implying there was not anything inherently problematic with the Harrier. It also goes without saying take-off and landing are generally the most dangerous phases of flight for any aircraft, regardless of design. Still, the Harrier was statistically one of the most dangerous aircraft to fly in the military during its time in service.

The AV-8B made its combat debut in the 1991 Gulf War. Harriers were aboard the amphibious assault ships USS Tarawa and Nassau and airfields ashore. It was intended to play a backup role but was forced into the fight when it responded to an urgent call for CAS on the first day of the war. From then on, the five deployed AV-8B squadrons were at the forefront of the Coalition air war, due to both the competency of Marine pilots and the tactical flexibility V/STOL offered. It was not a bloodless conflict for the Harriers, however as five AV-8Bs were lost and two pilots killed. Still, it proved so useful that General H. Norman Schwarzkopf considered it one of the most important weapons of the war.

Of course, America’s conflict with Iraq never ended, and Harriers would take part in patrolling the southern no-fly zone during the 1990s into the early-2000s. During that same timeframe, AV-8Bs participated in humanitarian and peace-keeping operations in Somalia, Liberia, Rwanda, the Central African Republic, Albania, Zaire, and Sierra Leone, flying air cover and armed reconnaissance sorties. It next saw combat over Kosovo in 1999, operating from amphibious assault ships as part of a Marine Expeditionary Unit (MEU). The Harrier offered deployed MEUs an immediate, integrated source of fixed-wing air power otherwise unavailable due to lack of access to land bases or the unavailability of an aircraft carrier.

But the Harrier’s heaviest experience with combat was yet to come. They were among the first combat aircraft available in-theater during the invasion of Afghanistan in the fall of 2001, in response to the 9/11 attacks. Soon, AV-8Bs were operating from air bases in Afghanistan, providing CAS to troops on the ground as they purged the Taliban and continued to do so for over ten years. It was also during this war the Harrier suffered one of its most shocking losses. On September 14, 2012, the Taliban executed an attack on Camp Bastion in the Helmand Province, destroying six AV-8Bs belonging to Marine Attack Squadron 211 (VMA-211), killing two Marines (including VMA-211’s Commanding Officer), and rendered the squadron combat ineffective.

In 2003, Harriers based aboard four “Harrier carriers” and in Kuwait supported Marines in their advance toward Baghdad during Operation Iraqi Freedom. The AV-8Bs exhibited significant lethality and, thanks to improvements like the LITENING pod, were able to provide around-the-clock air support for ground forces. Unlike during Desert Storm, where Harriers expended only unguided ordnance, most of the expenditures during Iraqi Freedom were of the guided variety. As in Afghanistan, Harriers would provide CAS during the entire occupation, up until the U.S. withdrawal in 2011.

Earlier that same year, AV-8Bs embarked aboard USS Kearsarge attacked targets in Libya while enforcing the U.N. no-fly zone over the country. Attached to the 24th MEU, Harriers also successfully defended a downed Air Force F-15E Strike Eagle pilot from advancing hostile Libyans. Five years later, Harriers also formed the main effort of a small air campaign to roll back the Islamic State of Iraq and the Levant (ISIL) in the same country. 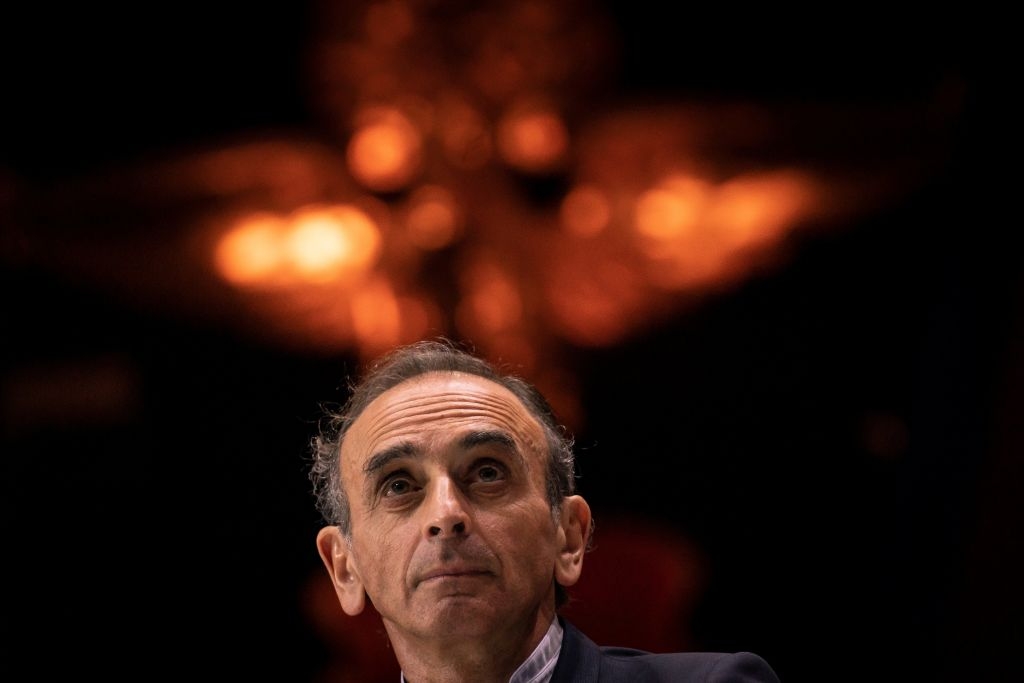 Our Honesty Crisis: How We Talk about Race