Senate Minority Leader Mitch McConnell (R-Ky.) on Monday said that he expects Democrats’ infrastructure proposal will likely be a “Trojan horse” that includes other Democratic priorities such as tax hikes.

“We’re hearing the next few months might bring a so-called ‘infrastructure’ proposal that may actually be a Trojan horse for massive tax hikes and other job-killing left-wing policies,” McConnell said on the Senate floor on Monday.

The starting point for infrastructure costs stands at $320 billion from a transportation bill previously passed in the House. However, the White House has so far declined to specify an overall price tag amid concerns of how to pay for it. Press Secretary Jen Psaki said on Monday that Biden will be discussing the proposal with his policy team “in days ahead.”

Addressing the Senate floor, McConnell suggested that the Biden administration is pushing policies that “do not serve the long-term interests of a majority of workers,” making reference to Biden’s cancellation of the Keystone XL Pipeline.

“Both working Americans and domestic energy took a back seat to left-wing signaling,” he said of the shutdown.

“Remember, the House Democrats tipped their hand last year. They published a proposal that was a sprawling proposal that pretended to be a highway bill. But it was really just a multi-thousand-page cousin of the green new deal,” McConnell continued, expressing skepticism over Democrats’ infrastructure proposal.

“Look, we know what kinds of policies are actually pro-job and pro-worker. We know what kind of agenda helps American workers build all-American prosperity, up and down the income scale,” he said.

“Pro-worker prosperity does not entail having big-government politicians or big-labor bosses micromanage every aspect of the economy to suit liberal fads. It means remembering what kind of pro-worker, pro-growth, pro-opportunity policies built the best job market in recent history, right before this pandemic.

Although the goal is a bipartisan infrastructure package, Democrats in Congress have signaled a willingness to go it alone if they are blocked by Republicans, given their current majorities in both houses.

“We need to get it done,” said Sen. Richard Blumenthal (D-Conn.) ahead of a virtual meeting with the president at the senators’ annual retreat Monday evening.

Sen. Bernie Sanders (I-Vt.) said last week that he plans to attempt passing the infrastructure bill by using a budget process to cut out Republicans, even though several Democrat senators have said they won’t support utilizing the method.

“One always wants to try to go a bipartisan route. But what I have seen this year and in past years is that if we want to do something significant, it is very hard to get Republican support. So the devil is of course in the details,” Sanders told reporters on Capitol Hill in Washington.

The COVID-19 relief package was passed with zero Republican votes after Congressional Democrats used the reconciliation budget process to bypass the filibuster, which lowered the threshold required in the upper chamber from 60 to 50.

An infrastructure package would include roughly $1 trillion for roads, bridges, rail lines, electrical vehicle charging stations and the cellular network, among other items, Democrats have said. The goal would be to facilitate the shift to cleaner energy while improving economic competitiveness.

No part of the proposal has been finalized and the eventual details of any spending could change.

McConnell last week signaled that Republicans won’t back tax hikes to pay for Biden’s infrastructure bill after a wealth tax was put forward by Democrats as a potential funding mechanism.

Zachary Stieber and The Associated Press contributed to this report.

America Should Swallow Its Pride on Iran 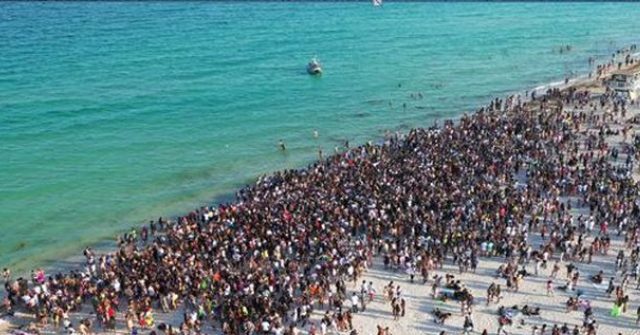