Something is very wrong with Joe Biden—mentally, medically, strategically—or all three.

Of course, he’s long been known as a tone-deaf gaffe-meister. Swearing on live mics. Patronizing politically. As head of administration transparency for Barack Obama, Biden closed the meetings.

Last year, as a candidate for the Democrat nomination, Joe spent much time looking lost in his own Delaware basement. All presidents since 1952 have used teleprompters, few more than Biden’s boss, Obama, who once comically used one standing in the dusty poop of a rodeo arena.

Those machines can be tricky, and the user is expected to appear to speak spontaneously and genuinely from the heart while robotically reading aloud every single word written by someone else scrolling before your eyes. Recall 2016 when Hillary Clinton, likely the worst modern presidential candidate, went on autopilot and even read aloud her parenthetical script directions “(PAUSE FOR APPLAUSE).”

Biden did overcome a childhood stutter. No easy task, but essential for politicians since the invention of radio. Biden’s problems, however, aren’t stuttering. He often appears confused, lost, unsteady, unprepared. Last fall he clearly had no idea what he wanted to say, so at times gave the teleprompter operator on-camera directions—“No, go back.” At one appearance Biden lost track of where he was, standing with his back to the camera.

He shunned spontaneous contact even with cooperative reporters, hardly taking questions. Aides, cupping his elbow for leverage, steered the 77-year-old (now 78) briskly through crowds. Before reducing personal appearances, Biden rambled, often without a point beyond being heard. One time when Jill Biden was speaking and gesturing, Biden put her hand in his mouth. Presumably, he was being silly, but it was a bizarre, worrisome action. Last month she interrupted one joint interview to finish her husband’s wandering answer.

Biden’s campaign days often ended by 9 a.m., while 73-year-old Donald Trump was doing four or five major rally speeches in multiple states daily. You might argue Biden’s absence was strategic to give an imploding Trump the full media spotlight. But it’s not the image of a sharp, fully competent chief executive confident and eager to lead the free world on the world stage.

At one town hall in Iowa, Delaware resident Biden asked audience members how the infrastructure was there in Ohio. Easterners do seem susceptible to confusing Iowa and Ohio. But that’s a dumb mistake casting doubt on mental acuity if you’re campaigning to be president of all Americans. Especially four years after your coastal party lost the election by ignoring most of the Heartland.

In office, Biden has been no model of action beyond photo-op signings. While a masked Kamala Harris stands stoically behind him, the oldest man to become POTUS sits at an empty impromptu desk with an immense presidential seal and his notes. On one Zoom conference with Democrats Biden offered to take questions. Boom! The video feed was instantly terminated. At another event the president couldn’t remember his defense secretary’s name, standing right next to him. While memory losses can occur ordinarily, they are also early signs of dementia, according to medical studies.

When Biden did get out of the White House, he had last week’s disastrous trip up the stairs of Air Force One, where he stumbled not once, not twice, but thrice. As my colleague Nick Arama and others have chronicled here, inept aides, who might have credibly dismissed the awful image as something that happens to everyone sometimes, blamed the wind. The wind? The President of the United States, who must face Xi Jinping, Kim Jung-un, and those murderous mullahs, was felled by the wind? This’s the best line Biden’s band of experienced aides can devise?

You saw much media attention last week on Biden’s exclusive network interview with a handpicked former Bill Clinton aide. It was taped Wednesday but not broadcast until Thursday. What you likely missed in the avalanche of adulation was a tiny italic note on ABC’s transcript—“Edited for Clarity.”

So, in those intervening 24 hours, Joe Biden’s potential confusions, mumblings, mistakes were edited for clarity? Seriously? By whom? Former presidential aides had never heard of such a thing. ABC didn’t answer an email request for clarification. But media does not clean up a president’s words for him. White House officials do not allow anyone else to play with presidential words. And you don’t let the White House change what’s on tape either, certainly not without a full public explanation.

More importantly, exactly what did Biden confuse? Americans have a right to know without sympathetic media covering for him. And what might that reveal about his mental state? Most Americans know some elderly, even care for them. They understand old folks accidentally fall, forget daily details, confuse names. They’re sympathetic. It’s called aging; it happens to those of us who survive.

But elderly grandparents do not have the nuclear launch codes. They cannot send loyal sons and daughters in harm’s way for decades in distant lands on mission-creep operations. During his almost daily media encounters, Trump underwent nonstop scrutiny. He said and did many controversial things in those 1,461 days. But No. 45 launched no new military conflicts.

Biden has not held a solo news conference in his first two months, a modern record. Another dodgy piece of circumstantial evidence raising concerns about his cognitive condition among ordinary Americans, who may disagree on policies but covet confidence in any leader. Not to mention worried allies and opportunistic adversaries, who may see an opening.

Reminder: In 1962 the world came closest to Armageddon when the Soviet Union moved nuclear missiles into Cuba after Premier Nikita Khrushchev determined that John Kennedy was a weak president.

Biden’s first news conference is Thursday. But by seeking to hide what has become obvious infirmities, aides have not served him well so far. And media seem reluctant to press that issue hard. This has now gone beyond politics. The concerns must be addressed forthrightly. 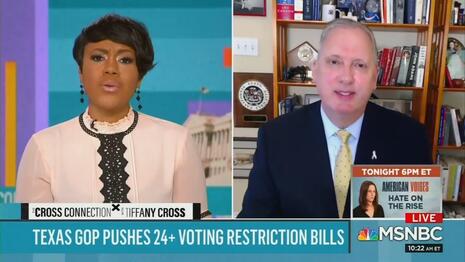 MSNBC's Tiffany Cross To Republican Guest: 'Don't Spit In My Face and Tell Me It's Raining'