“I was robbed,” cries out your daughter as she sits silently and watches her classmate take her position on the starting line. You agree. But, unfortunately, you have no words to comfort your daughter in her time of need. As parents, we tell our children if you work hard, you can achieve whatever you set your mind to; however, you never prepared your daughter for a situation of this caliber.

Unfortunately, this is a stark reality for some parents across the nation where, in states such as Connecticut, transgender boys are allowed to compete against biological girls in sporting events.

How do you explain to a 15-year-old that all of the late nights and early mornings training and perfecting technique were for nothing? Because the truth of the matter is, it isn’t your daughter’s lack of ability holding her back but rather a physiological difference that makes it nearly impossible for her to be able to compete against someone who was a biological male at birth.

As a mother of a precious 2½-half-year old girl, I want my daughter to not only have the opportunity to compete in sports, but also to succeed. As attorney general, and on behalf of my daughter and all of our young female athletes in the great state of Arkansas, I hereby challenge President Biden’s Executive Order 13988 in the state of Arkansas with The GIRLS Act: Gender Integrity Reinforcement Legislation for Sports.

The GIRLS Act will provide equity for females in girls’ sports. Under this legislation, all schools will be required to monitor and enforce its athletes competing in the proper athletic event based on the sex assignment found on their birth certificate. The proposed bill allows anyone who is deprived of athletic opportunities to seek a court order stopping the violation along with damages and attorney’s fees in a lawsuit against any Arkansas school that violates the legislation.

We in the state of Arkansas are simply asking that biological boys compete against one another in physical competitions. This ensures equity for all — boys, girls, and individuals who identify as transgender.

President Biden’s executive order “Preventing and Combating Discrimination on the Basis of Gender Identity or Sexual Orientation” stipulates that “all persons should receive equal treatment under the law, no matter their gender identity or sexual orientation.” But shouldn’t that same standard apply to biological females?

Title IX was established to protect against sex-based discrimination, yet President Biden’s executive order blatantly affects biological females and their ability to succeed. There are enough societal barriers for girls to overcome without the federal government unjustly implementing more to their detriment.

For 49 years, Title IX has worked to level the playing field for young girls looking to participate in athletics. One of President Biden’s first moves was an executive order setting these rights back potentially decades.

Sports in particular have been proven to improve self-esteem in girls during adolescence, decrease their chance of developing depression, as well as provide opportunities for them to succeed later in life through scholarships and academic achievement in college. Values like teamwork, leadership, and perseverance are instilled at a young age, and continue on with our female athletes well into the rest of their lives.

In a world where females are already at a societal disadvantage, we should be championing their rights as young athletes. The GIRLS Act not only challenges President Biden’s executive order, it ensures that our female athletes and their right to compete in sports in a non-biased manner is enforced. My little girl, and yours, deserve to be represented and they deserve equal opportunities to succeed in all areas of life, including athletics.

Leslie Rutledge is the attorney general of Arkansas and is running in the Republican primary to be the next governor of Arkansas. Voting Rights --Then and Now 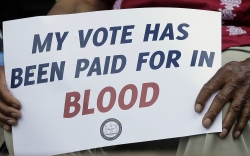