An emergency shelter in Midland, Texas is under scrutiny over safety concerns for the children being housed there. The facility has faced multiple issues this week since the Biden administration hastily opened it to hold some of the overflows of unaccompanied minors being apprehended on the U.S.-Mexico border.

A converted camp for oil field workers in Midland was set up so quickly that local officials were not even notified by the Biden administration that it was happening. The administration is scrambling to find shelter for the flood of incoming unaccompanied minors. It is also moving the illegal migrants away from the border to await further processing. In this camp, more than 10% of the camp’s population has tested positive for COVID-19 and one child has been hospitalized. Further admittances to the shelter have now stopped.

As of Wednesday, there were 485 youths sheltered at the camp, 53 of whom had tested positive for COVID-19. The U.S. Health and Human Services have notified local officials that it has no further plans to bring more teens to the site. HHS spokesman Mark Weber said in an email that taking in more teens at this time is “on pause”.

The speed in which this camp was set up for the minors seems to be a problem. Rep. August Pfluger, a Republican who represents Midland was allowed to visit the camp soon after it opened and noted that “It’s a professional facility that was intended for workers.” It uses portable units that serve as rooms for the teens. Pfluger spoke of a lack of transparency from the Biden administration in its haste to shelter the minors.

But Pfluger and other Midland officials said the Biden administration wasn’t answering their questions or giving them assurance that officials would keep the surrounding community safe. HHS opened the Midland site without notifying some top local officials who say many of their questions aren’t being answered.

The email HHS sent to local officials this week details the haste with which government officials opened the site. It says officials identified the camp Friday and signed a contract Saturday. The first group of teenagers arrived Sunday night.

“People don’t trust what they’re doing. They don’t feel secure,” Pfluger said. “The lack of transparency only serves to magnify that problem.”

HHS is relying heavily on Red Cross volunteers in both the Midland and Dallas convention center shelters. Typically, the standard practice is to have paid, trained staff watch over minors. Red Cross volunteers sit outside portable trailers in Midland to monitor the teenagers staying inside. There are also HHS staff and U.S. Public Health Service staff at both sites. There are questions over whether or not FBI fingerprint checks are being run on volunteers and also the availability of mental health care for the children.

Neither HHS nor the Red Cross would say whether the volunteers had to pass FBI fingerprint checks, which are more exhaustive than a commercial background check. Both agencies have declined repeated requests for interviews.

The waiver of those background checks at another HHS camp in Tornillo, Texas, in 2018 led to concerns that the government was endangering child welfare. HHS requires caregivers in its permanent facilities to pass an FBI fingerprint check, and the agency’s inspector general found in 2018 that waiving background checks combined with not having enough mental health clinicians were “serious safety and health vulnerabilities.”

The official who spoke to the AP on condition of anonymity said there was not sufficient mental health care at the Midland camp for minors who typically have fled their countries of origin and undergone a traumatic journey into the country.

The Red Cross vouches for its volunteers in Midland and Dallas. They have received training “in sheltering operations and COVID-19 safety” though the Red Cross will not confirm how many hours of training is involved. Most of the volunteers don’t speak Spanish, which is a problem since the minors are mostly coming from Central America.

An official working at the Midland, Texas, facility said most of the Red Cross volunteers staffing the site don’t speak Spanish, even though the teenagers they care for are overwhelmingly from Central America. When the facility opened, there weren’t enough new clothes to give to teenagers who had been wearing the same shirts and pants for several days, the official said. And no case managers were on site to begin processing the minors’ release to family elsewhere in the U.S.

Bringing in teenagers while still setting up basic services “was kind of like building a plane as it’s taking off,” said the official, who declined to be named due to government restrictions.

The previous administration is being blamed for the crisis at the border because of course, it is. It’s malarkey but that is the talking point. When all else fails, blame Trump. One attorney, though, admits the haste in which these shelters are being opened presents problems for the Biden administration.

Leecia Welch, an attorney for the National Center for Youth Law, interviewed children last week who were detained at the Border Patrol’s sprawling tent facility in Donna, Texas. Many of those children reported going days without a shower or being taken outside.

Welch noted that Biden “inherited a dismantled immigration system and the impact on children, in particular, is becoming increasingly dire.”

But, she added, “building more and more holding centers without services or case management is just trading one set of problems for another.” 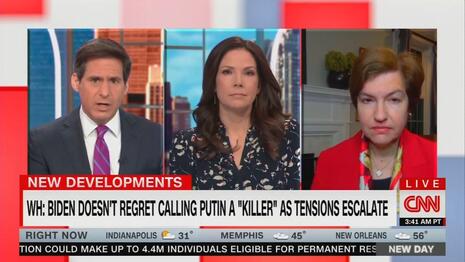