The Uses and Abuses of ‘Woke Capital’

More than half a decade ago, I began using the phrase “woke capital” in conversation and occasional social media posts. At the risk of sounding like someone’s father rushing the stage on Jerry Springer, I would like to register a disputed paternity claim here before disavowing my offspring.

These days when most people think of “woke capital” they have in mind something like the thesis of Stephen R. Soukup’s recent book, The Dictatorship of Woke Capital: How Political Correctness Captured Big Business, which is the opposite of the argument I once hoped the phrase would help me to make. When I referred to “woke capital” I was attempting to do two things. The first was simply to draw attention to articles like this one, which I will never stop finding hilarious. The other point, which I wish I had made clearer in my published writing on the subject, was more serious.

The simplest way of making it is to say that woke capital is a tautology. It does not refer to some novel or avoidable market configuration, but to the nature of post-Fordist capitalism. The Goldman Sachs rainbow logo is not a question of marketing interns bringing undergraduate priorities to our otherwise hard-nosed financial institutions; indeed, it should go without saying that no one who factors into the consideration of these corporations, least of all shareholders, objects to these things. Nor is wokeness a serious concession to powerful coalitions comparable to the arrangements between business and organized labor reached during the last century; it is not an obstacle to profit or to the principle of maximizing shareholder value but an inevitable consequence of the latter. The teleology of globalized capital was always going to be wokeness, by which I mean the emancipation of men and women from every bond, custom, obligation, tradition, attachment, or harmlessly venerable practice they might once have held in common, sometimes more or less consciously—e.g., the moral dictates of the Christian religion—but more often than not simply as a matter of habit. This blind destructive power is, in fact, what wokeness is.

When I began thinking about woke capital years ago, I had two distinct audiences in mind. The first was social conservatives, who, I fondly imagined, simply had not considered the essential tension between their lionization of free markets and their ostensible opposition to the novel social phenomena to which the former gives rise. But I was also trying (hopelessly, it should go without saying) to reach earnest progressives, in the hope of showing them that abortion, same-sex marriage, the mutability of biological sex, and so on were not of a piece with their support for single payer health care, higher wages, unionization, and the environment, and that the former were simply the effluvium of an economic system they were attempting to destroy or at least to reform significantly. In other words, I wanted both sides to see that what one might call left-wing fusionism was as untenable as the old right-wing variety.

When I say “untenable” I do not simply mean as a matter of tactics or coalition building, though this is certainly the case, as Bernie Sanders learned in 2020. When progressives endorse gender ideology or the abolition of the family, they alienate many of their would-be supporters among the working class. But in a very real sense, they also acknowledge their own defeat, their hopelessness in the face of material conditions that they cannot meaningfully alter, and to which the only prudent response is ratifying the never-ending series of disruptions produced by the system. This, one suspects, is why year after year liberals console themselves with the thought that, while they have not delivered broad-based prosperity to African Americans, they have at least managed to increase by some small percentage point the number of individuals on the board of this or that major financial institution who have undergone gender reassignment surgery.

It follows here that the response to “woke” capital from conservatives should not be to suggest that we replace the bad woke capitalists with the good unwoke ones, who will despoil the environment and brutalize their employees while signaling some vague commitment to “Christian values.” This, too, is an acknowledgement of defeat and to my mind a far more dangerous one, because it tacitly suggests that there should be no ordered relationship between economic life and morality. Such a view, in addition to valorizing conduct that is inherently wicked, will ultimately lead—or, more to the point, has already led—to the undermining of all the other claims about the nature of truth and justice that we have tried and failed to make. If we really have no objection to what Amazon does apart from its refusal to host certain websites or to sell certain books, we do not know why it is bad. This kind of reasoning is simply the right-wing equivalent of those clickbait pieces about the fifty best Pride Month logos.

There will always be an audience on the right for fables about the tender maid Commerce seduced by Captain Woke, that dissembling scoundrel who robbed her of both her virtue and her patrimony, just as progressives will never accept that the legalization of same-sex marriage by judicial fiat was a victory not for justice but for wealthy people hoping to avoid taxes. This is why I suspect that “woke capital,” both the phrase itself and the material conditions I once hoped it would help to describe, are not going anywhere.

Matthew Walther is editor of The Lamp magazine and a contributing editor at The American Conservative.

The post The Uses and Abuses of ‘Woke Capital’ appeared first on The American Conservative.

My Tibetan Friends and ‘Rooftop Koreans’ Know All About Gun Control 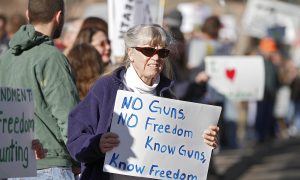