Appalachian Power, the second largest electric utility in Virginia, is seeking an 11% increase in rates paid by consumers residing in the commonwealth to pay for electric transmission costs.

If approved, Appalachian Power would increase the Transmission Rate Adjustment Clause from $225.1 million to $337.7 million, which is a $112.6 million increase. It would increase the monthly bill for a customer by $11.52 for every 1,000 kilowatt hours. It would go into effect in July 2021.

The rate change, which was first requested in 2017, would allow the utility to recover the costs for transmission infrastructure improvements. The request would need to be approved by the State Corporation Commission before the increase could be levied.

“Appalachian is making significant investments in transmission infrastructure to improve grid reliability and accommodate the anticipated growth in renewable generation,” the utility said in a statement.

According to a news release, the Rate Adjustment Clauses allow the Appalachian Power to adjust parts of the bill periodically to cover specific costs not included in the base rates.

The utility has 1 million customers in Virginia, West Virginia and Tennessee. It is a subsidiary of American Electric Power.

Biden Administration Says Border ‘Not Open,’ While Calling for Expansion of Legal Entry 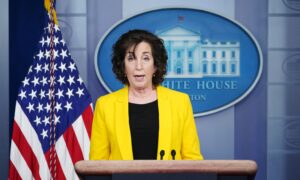