Representative Jamaal Bowman (D., N.Y.) on Thursday expressed support for an extension of security measures at the U.S. Capitol, saying additional resources are needed “because the threat of white nationalists and white supremacists is real.”

During an appearance on MSNBC, Bowman said white nationalists “are continuing to organize and galvanize across the country.”

“There are many examples of them infiltrating law enforcement across this country so we have to make sure the Capitol is protected and our elected officials are protected but we also have to be proactive we cannot take the threat of white nationalism lightly,” the progressive congressman said.

He cited the 2018 Tree of Life synagogue shooting in Pittsburgh that left eleven people dead, as well as the 2015 Charleston church shooting that killed nine people as evidence of white supremacists making their “presence felt” over the last several years. He also noted the Christchurch, New Zealand mosque shootings which killed 51 people in 2019.

He said the events, as well as the January 6 rioting at the Capitol, show “we have to do everything we can to protect ourselves and protect the Capitol.”

“We also have to be proactive in dealing with the issue of white nationalism in a very serious way,” he said.

U.S. Capitol Police have requested that the National Guard continue to deploy service members at the Capitol for at least two months, the Associated Press reported on Thursday. The request is reportedly being reviewed by the Pentagon.

The House canceled its session on Thursday after Capitol Police warned on Wednesday of a “possible” plot by an unspecified militia group to attack the building.

However, last week an FBI official told the Washington Post that the bureau didn’t “have any indication of violence or a specific, credible plot at this time” for Thursday.

House Speaker Nancy Pelosi (D., Calif.) told reporters that “decisions about security are made by the security leadership here and we’ll see what that ask is.”

“We should have them here as long as they are needed,” she said of the National Guard.

Lawmakers on both sides of the aisle have called for National Guard members who have been deployed to the Capitol since January 6 to be sent home, as well as for the security fencing around the Capitol perimeter to be taken down.

“We want to understand what the plan is,” said Representative Elissa Slotkin (D., Mich.). “None of us like looking at the fencing, the gates, the uniformed presence around the Capitol. We can’t depend on the National Guard for our security.” 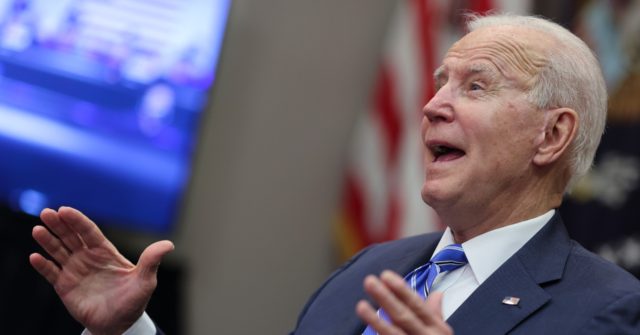